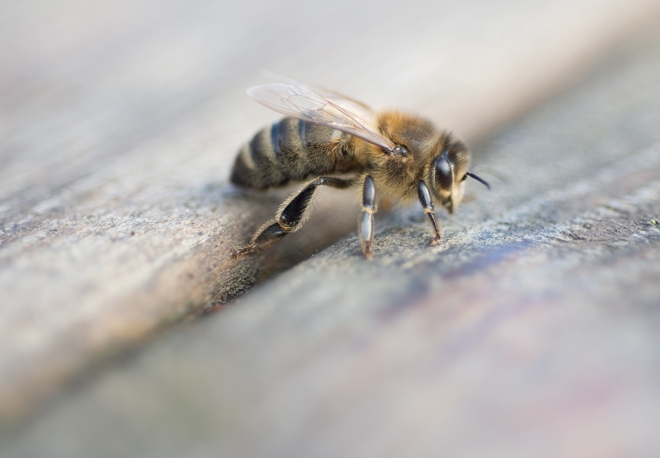 So it didn’t take long for Christmas to come and go. I actually spent Christmas Eve hiding out by the Growing People polytunnel in hopes of catching a fox that I had spied in the undergrowth. All of January’s photos are shot on location here. 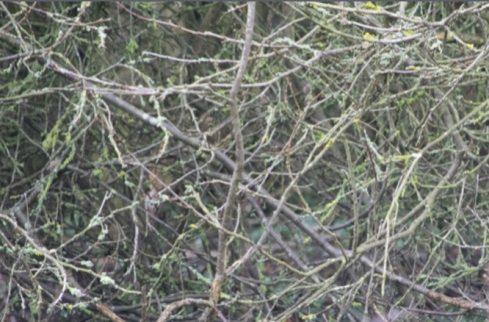 So technically, this is my first ever fox photograph. Can you see that little tuft of orange from what appears to be a tail and some of its body?

It caught me by surprise as I walked down towards the polytunnel to take some macro shots of seedlings and insects inside. By the time I scrambled into my backpack to retrieve my lens it had scarpered off into the bushes and I could not find it again. So began my obsession with finding it. I spent several days over Christmas in this area waiting and hoping and catching nothing but a cold.

Not something you see regularly in January (BBC Springwatch added this photo to one of their flickr galleries because of that.) Several months later I’d discover that we actually still have a beehive – abandoned by us, but not by them – on the fringes of the land where I volunteer. It sat very still on the table while we had elevenses.

Another excuse to use my 60mm lens. This thing was so tiny, the size of a pinhead. It halted at a vast lake (a rain drop) and refused to cross. 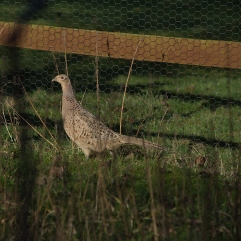 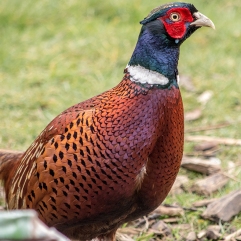 The owner of those foot prints from December finally showed up. I spotted both male and female pheasants. I’ve actually seen at least three females together at one point. Though the male is fairly shy, (the females are exceedingly so) when pecking around I was able to get quite close to him for this shot. He often struts around like he owns the place. As of yet, I’ve not seen any young.

The jackdaws that live here have a nest in an old chimney. They also pose quite happily for me, giving me brill bokeh.

January had some uncommonly nice weather, though perhaps it was lulling us all for what would happen in March. It was actually pleasant to be out at times, and this Fieldfare enjoys the sun perched high up in a tree.

This kestrel is another sun bather, and like all the other January shots, is a first for me. Unfortunately I spooked it as I attempted to get closer to it, as it was quite far away.

This puffy blackbird was quite fond of the apples once they had fallen off the trees, and could often be spied tucking into the fruity scene of carnage on the orchard floor.

Both grey and black squirrels can be sighted at the rear of the grounds and if you arrive early enough, can be spied closer to the office, scurrying across the fence or attempting (and succeeding) to get into the bird seed box.

While a Goldcrest might not be considered rare, these tiny (UK’s smallest bird) can be very hard to spot. They also never stay still for me, so catching one bathing was pretty special. It was just one of those ‘right place, right time’ scenarios that we are gifted with. I loved looking through the lens and watching his face, eyes wide open, as he splashed around gleefully. Note the orange in his fabulous mohawk, signifying it as a ‘he’.

One thought on “Episode 2 – January, birds and bees and fox tails”