In this bumper episode I’ll find some more wildlife to add to my ‘first photographed’ list while still getting to grips with my new lens.

What I have discovered about spring is that the lighting has improved drastically but the leaves and undergrowth haven’t quite fully blossomed making it much easier to photograph birds. This is probably the most ideal time to get out with the camera.

This Blue Tit is a good example. Had I taken it a month or two later I’d have only probably seen half of its body.

Again, the same apple tree is visited by a Goldcrest. Considering how erratic its movements were I am pleased with the shot.

This is my first Dunnock photograph. I always enjoy getting home, looking at my photos in Lightroom and then trying to identify new birds I’d seen that day.

This Great Spotted Woodpecker is another first for me. It has also proven to be the trickiest bird for me to capture, as I had spent many weeks going to the location of either the pecking sound or its laughter. Every time it evaded me, so it was a complete surprise when I looked up to find not only was it perched and pecking at the wood, but that it hadn’t spotted me yet! It was very high up in the tree. (A good 60+ ft)

You can see the bark flying from one of its rapid pecks, and it flying away (As usual). 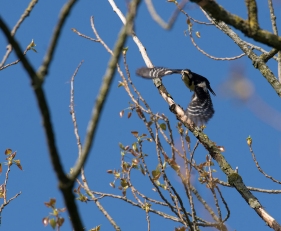 Yet another first. This Chaffinch was shot while I was hunting the woodpecker (Prior to me capturing the above shot). I wasn’t quite sure what I was photographing as I fired off a quick burst so I was quite surprised to have identified it. While a common bird, it is one that hasn’t been on my radar up until now.

Another Chaffinch, another day, another song.

This beautiful Wren is another bird I’d yet to see or photograph. I heard something singing quite enthusiastically and eventually found the culprit. I wasn’t able to get any closer shots, for I spooked it upon moving closer.

I really like the pattern on its wings and those grey eyebrows.

This is the first time I’d seen both male and female pheasants together. They even leaned in for a quick kiss.

I was able to get closer to the female on one day and just capture its head as it poked out from the tall grass.

Finally a photo of the Jay in the light! I’ll put it down to luck, that I was in the right place at the right time since this guy is extremely camera shy and nigh on impossible to track down.

A shady squirrel, up to shady business.

This rabbit has enjoyed many a carrot from the allotments where it rests close by in the shade during the warm sun.

A Speckled Wood butterfly enjoys the May sun.

I don’t know if it was rather late in the year for these to be breeding, but I shot these in the first week of April. I never did see any tadpoles or frogspawn afterwards though 😦 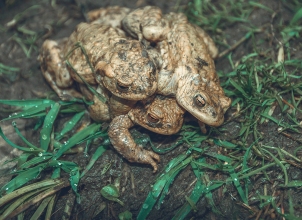 Compared to winter, I had not seen many robins around. In fact, they had become pretty rare, so it was nice to have finally spotted one on the branches of a blossoming apple tree.

A blackbird unearths a delicious worm.